UR e-series make collaborative automation accessible for everyone

In "e-Series' the letter "e" stands for "Evolution" and it is at the core of Universal Robots' vision: to provide users with the potential to master their production processes.

The e-Series family has 3 members - UR3e, UR5e, and UR10e. Each robot has a different reach and payload, but they all share the same precision, accuracy and dependability which make them valuable addition to any production facility.

Samll but powerful, the UR3e has a payload of 3 kg and a reach radius of 500 mm. With its 360-degree rotation on all wrist joints and infinite rotation on the end joint, this table-top cobot can easily handle high precision tasks and light assembly jobs alike.

The medium-sized meber of the UR e-Series family is the ideal solution for the automation of low-weight processing tasks with its payload of 5kg and 850 mm reach radius. UR5e is easy to program and fast to set, as it provides the perfect balance between size and power.

Thanks to its ability to automate tasks up to 10 kg with no compromise on precision, the UR10e is the family's most powerful cobot. The reach radius of 1300 mm also enables it to carry out jobs like packaging and palletizing in facilities where there is a larger distance between different operating areas.

With its new, built-in Force/Torque sensor, the UR e-Series are ready to take on tasks such as assembly, grinding, polishing, and griding, where force control is of critical importance for optimal results. Moreover, the Force/Torque sensor can be used for measuring weight, process check-up, and record of impact.

The UR e-Series offer oustanding convenience - all it takes is an hour, in order for the robot to be unpackaged, mounted and programmed for its first tasks. The new communication interface reduces the time needed for production line integration. The new cobots also have four additional digital inputs which ease the conveyor tracking.

End-users who require various applications will be supported by the e-Series platform Universal Robots+, which helps the robots adapt to the clients' growing and changing needs.

The user interface now includes time for stopping and time for distance that can be programmed in advance, in order to enable this process when necessary. This unique feature greatly reduces the complexity and uncertainty that are involved in the risk analysis prior to starting work. 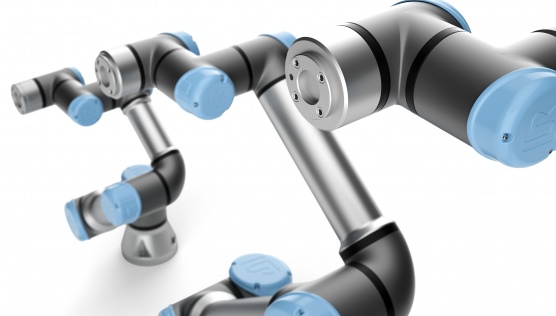 Reduce the robot deployment time from weeks to hours with Universal Robots. Our e-Series cobots do not require special electrical installations and can be connected to any regular power outlet. Easy set-up, installation and integration are enabled by an intuitive user interface.

Universal Robots are lightweight, requiring minimum space and easy to re-deploy to variety of applications without changing the existing manufacturing layout. They can be moved between tasks, giving customers the flexibility to automate multiple manual tasks within the same production facility. 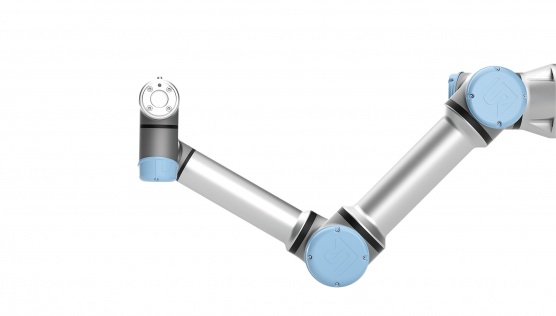 Forget programming school! With Universal Robots Academy anyone can become a robot programmer, thus, saving on costs for their company-employer. Our user friendly, intuitive 3D interface allows anyone within the manufacturing facility to turn into a programmer, despite the lack of prior programming experience. The easy-to-use teach pendant allows operators to program a cobot by moving its arms to the desired positions, or simply by using the drag-and-drop functions on a touchscreen tablet. 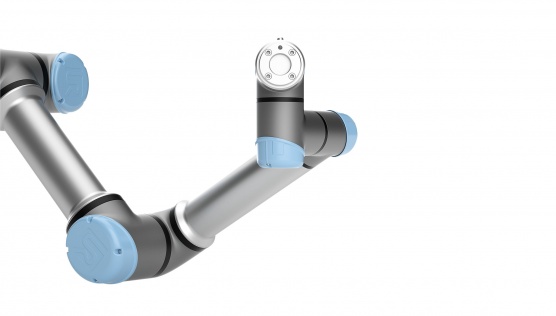 At Universal Robots, we provide our customers with all the advantages of advanced robotic automation and collaborative robots without any of the traditional added costs associated with robot programming, set-up and safety guarding. Universal Robots have proven to be a cost-effective alternative to the traditional market offerings since the average payback with UR is just 12 months.